In early 2016, Playtech first unveiled its plans for The Age of Gods series. This series should consist of slot machines with progressive jackpots, including the games Age of the Gods, Age of the Gods: King of Olympus and Age of the Gods: Furious 4. These slots were designed to replace the popular Marvel Comics-based slot machines after Disney bought the company and did not renew its gambling licenses. Therefore, great emphasis was placed on the details, after all, the new games should be just as good as their predecessors.

The similarity to the predecessors is, of course, logical and intentional and fans of Age of God will find exactly what they expect. Coherent setting, a great atmosphere and successful bonus games with exciting features that are worthy of the gods wait for them here. Age of Gods Furious 4 is of course similar to its role model Age of Gods and if you liked this slot, you will also be warm to this one. The bonus games are varied thanks to their four different features. 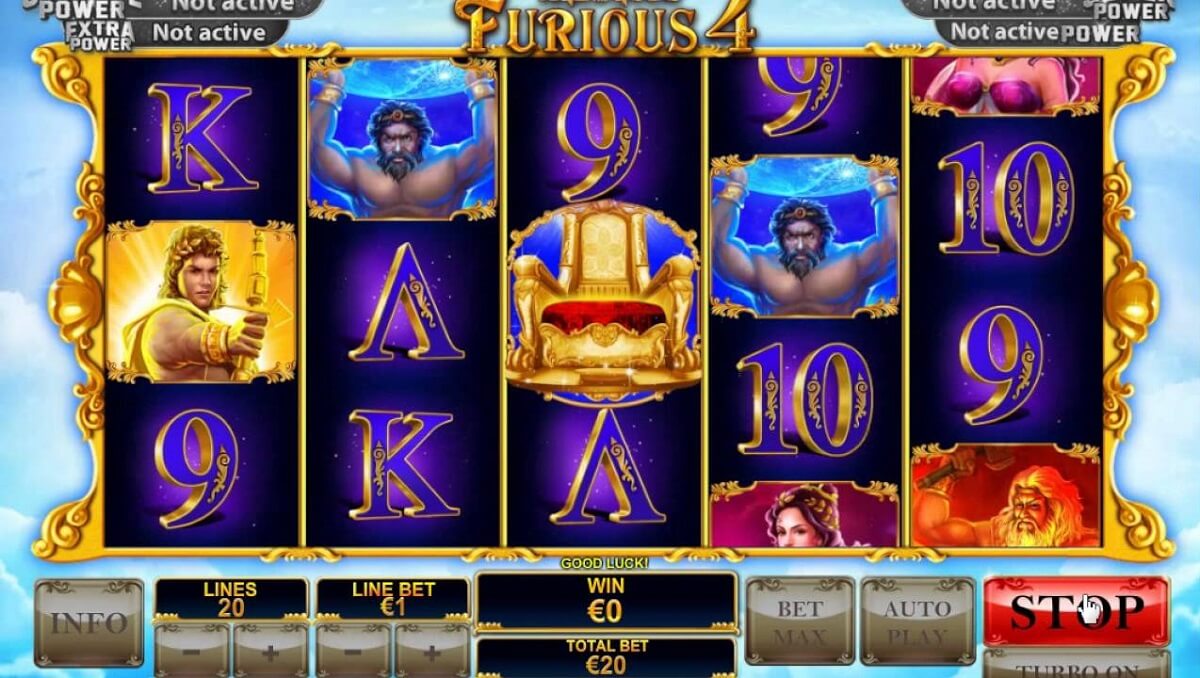 Of the three games presented so far, Age of the Gods: Furious 4 seems to be the best alternative. Of course, it depends on your personal preferences, which is why we rate the game at this point.

The slot is a five reel, 20 payline game that takes you to ancient Greece. Age of the Gods Furious 4 focuses on four mythological characters, including the gods Apollo, Hephaestus, and Atlas. The fourth character is Pandora, who, as you know, was created to unleash into the world the evil contained in a box. Each of these four characters forms a superordinate symbol. Pandora and Apollo have the added power of winning on a payline that starts with only two symbols while the other requires three symbols. The nine classic royal flush poker symbols make up the lowest value symbols.

You should also watch out for the Wild symbol in Furious 4. This symbol has the highest value and pays you 10,000 times the stake on a payline if it appears there in all five places.

The Age of the Gods Furious 4 slot machine offers betting options from 0.01 to 100 euros/ dollars/ pounds. 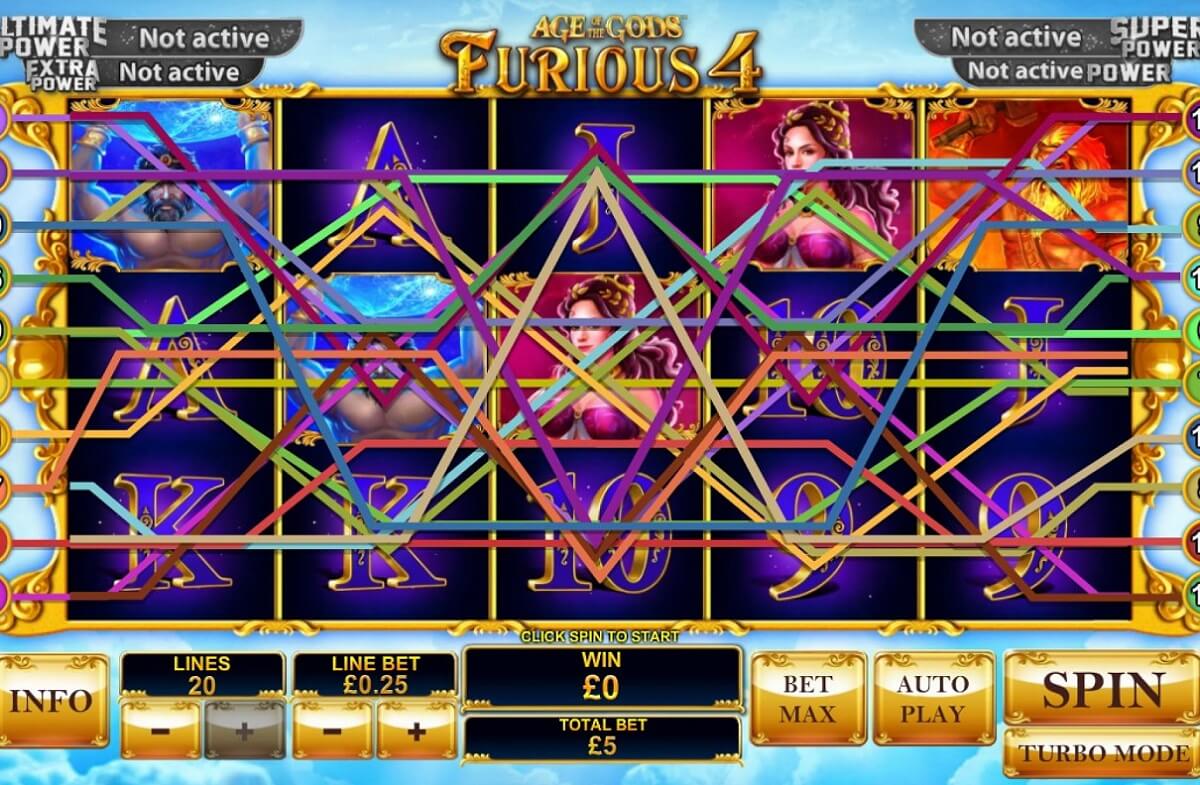 Just like the other Age of the Gods slots, the Furious 4 slot gives you the chance to win one of four progressive jackpots. The higher your stakes are, the higher your chances of winning will be. The jackpot round is triggered randomly, which takes you to a field with 20 quadrants. You have to find three matching symbols to hit the Power, Extra Power, Super Power or Ultimate Power jackpot, the latter is of course, the highest of these jackpots.

The slot machine has some unusual features. One is the placeholder symbol that appears on every reel. This symbol forms a unique payline with only 2 symbols. The Scatter symbol can also appear on any reel.

As it was already mentioned, this game is mainly about the free spins feature, which is activated when you see three or more Scatter symbols on the reels. In this case you will receive twelve free spins for one of the Gods, it depends on which God can be seen on the middle reel. The rounds go as follows:

Age of the Gods Furious 4 is designed for tablets, mobile phones and desktop computers. As with the predecessor, there is nothing to complain about if you like to play this slot on the cell phone or other mobile devices. Play on the go with Android or iOS devices. Only the turbo button could be a little bigger.

The game comes with a subtle soundtrack and relies heavily on other sound effects to activate features or wins. The illustrations and sound effects look a bit old-fashioned, but they are still convincing.

The Age of the Gods: Furious 4, is arguably the richest in terms of all-round playability, beauty, and rewards. With Prometheus, Apollo, Pandora and Atlas, over five reels and 20 paylines, this jackpot game offers a glimpse into ancient Greek mythology and a range of epic bonus games. With a solid return-to-player ratio of over 94%, a base jackpot of 10,000 coins, a progressive jackpot integration and one of the most innovative bonus games, Furious 4 is a must have for players who are still missing Marvel slots. 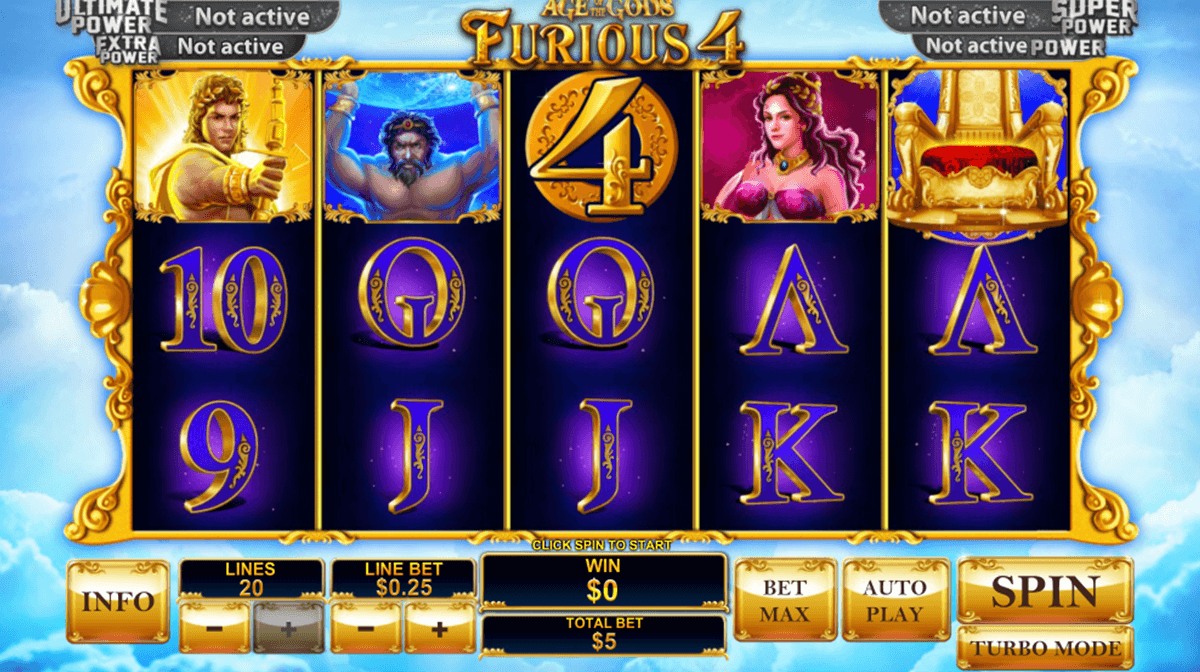 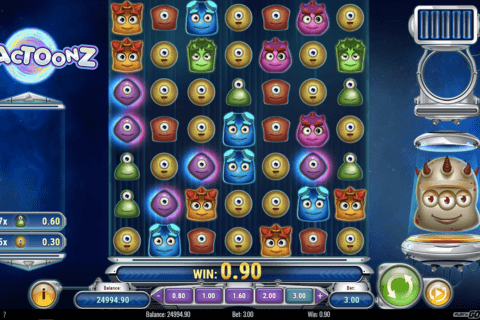 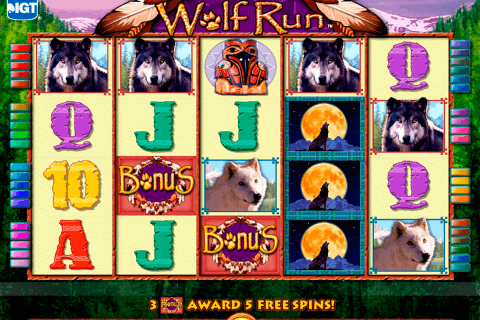 Play Age of the Gods: Furious 4 in Casino for Real Money 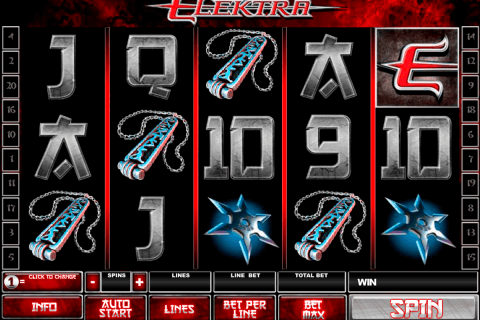